Business and Branding #1: Built to Last or Built for Now

Working on some business planning lately, I’ve been thinking a lot about branding.

Specifically about how I brand my business and how attitudes to branding have changed during my working life.

Built to last, for a world that was

I’m no branding expert – far from it – but it seems to me that whereas in the world of work I entered back in the 20th century there was a high value set on companies and their names and images (what we now call “brands”) being built to last, that attitude doesn’t cut as much ice today as it did back then.

I’m reminded regularly of that when I see the names of companies long gone (or swallowed up by others) on older buildings when I visit my former home town, the City of Sydney.  They linger on, relics of an age when people thought it made perfect sense to build the company’s name – or what we would now might call its “brand” – into the very masonry of the building. It was a statement that the company, like the building, was there to stay.

Doing that now would probably be regarded as a sign of hubris or just plain silly.

Who knows what changes will be needed in the company’s operation, location, size and even brand, within a few years?

Best to have a detachable, replaceable, re-locatable mode of branding.

But as I say, it was not always thus. 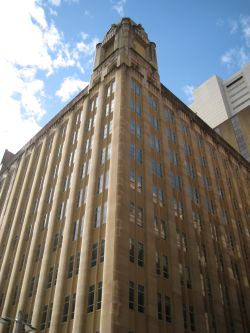 The MLC and a rolling stone

The Henry Davis York Building, No. 38-46 Martin Place, Sydney, is a case in point. An 11-storey, art deco building, it was the former headquarters of MLC, a large finance company, a giant of the Australian insurance business when I went to work there, just out of high school, many moons ago. 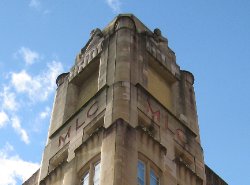 The building and its name were there to stay, like the company. In fact, the large, red, carved letters “MLC” are still visible on the clocktower, although a clock is currently missing.

MLC has long moved. The building was taken over by the National Australia Bank in 2000 and is now tenanted by the law firm Henry Davis York – hence the current name of the building.

The MLC company itself, established in 1886 as the Citizens’ Assurance Company Limited, is now a subsidiary of another company, the National Australia Bank.

But back in those days when I worked with the former MLC, I think people saw it as being a very stable kind of company to work for and people were expected to stay. And stay.

So when after only six months I told the MLC’s Chief Accountant that I was leaving – not necessarily to go anywhere else immediately (it was a time when there were plenty of jobs going) – he gave me the stern warning that “if you’re not careful you could become a rolling stone”.

I’m happy to say that I believe I have succeeded in fulfilling the long ago Chief Accountant’s prophecy. No moss here.

The traditionalists among us and those who abhor change, may yearn for the old days of buildings with the company name built into the masonry for posterity.

The rest of us have learned to tolerate or perhaps even embrace a world where the pace of change means new company configurations, new ways of working, new brands, different buildings and over much shorter spans of time than previously.

Even – now here’s an idea – maybe even change leading to more professionals working from home, building global or local businesses from their notebook computers with fast Internet connections, linked to colleagues and markets seamlessly.

“Built to last” was a great idea in the 20th century and in some respects is still a good idea – bridges for instance.

But these days we need our businesses and our plans to be built for now.

And ready to be changed when circumstances change – as they have a way of doing. Rapidly.

That doesn’t mean we have to forget about staying the distance.

In the next post on this topic I’ll share some thoughts about adaptable branding for professional services.

In the meantime, if you have thoughts or experiences to share on the “built to last” vs “built for now” issue, please share.

Business and Branding #3: Brand You